Last night's Olympic opening ceremony was an absolute triumph for (Sir) Danny Boyle and Britain, showcasing our islands' story and reminding the world of our values. For me, one of the greatest strengths was that - unlike most other opening pageants - it didn't take itself too seriously. It remembered that one of our greatest strengths is the ability to laugh at ourselves - that's always been a restriction on the capacity of the far right and the far left to establish more than a foothold here - their pomposity always ends up being punctured.

You can argue that Boyle has spent £27 million on sticking two fingers up to David Cameron in front of the rest of the world, choosing his values carefully - and I did that on Twitter last night, but I think there's a deeper truth there that offers even less comfort to the PM. The national values on show last night, the direction of travel indicated by that magnificent, mad, melange of motion and emotion may be more representative of the Britain that we are and the Britain that we could be. It is not that Boyle was directing us leftwards, but holding a mirror up to the movement of the British people in that direction. We have changed and are changing still, 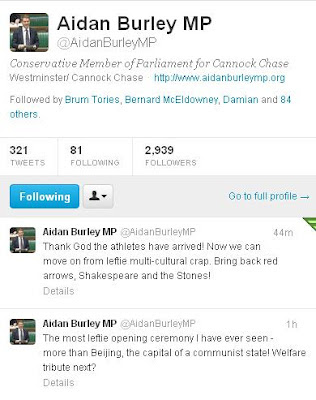 Meanwhile, of course, there were those who sniped from the sidelines. Aidan Burley, currently the Tory MP for Cannock Chase, posted a couple of tweets criticising the 'leftie, multicultural crap' and demanding the return of Shakespeare. (That would be the poet and author who included cross-dressing and racial tension in his work. I'd steer clear of the Merchant of Venice and Othello, if I were you, Aidan).


After that tweet appeared, there then followed a period of silence from the MP, perhaps as what he had done sunk in under a concerted beating from Twitter, before a further tweet claiming that he had been misunderstood.

This morning saw him touring the media outlets and performing backflips and somersaults worthy of the GB Olympic gymnastics team, as he claimed that he was merely speaking out about the over-representation of 'rap' music, which is only - apparently - about 20 years old. (Actually, it isn't - it is in fact older than Mr Burley himself, which perhaps speaks volumes about his own relevance, if he uses that as a marker). Yes, Aidan Burley may be in his early 30s - possibly the 1930s - but that doesn't mean he can't hold tremendously reactionary views, harking back to a mythical golden age that he cannot possibly recall.

This is, of course, the MP who remains under investigation for attending a Nazi-themed stag party in France, with the stag photographed bedecked in full SS gear and raising his right arm in a salute. Nothing says multi- culturalism like dressing as a Nazi and toasting the Third Reich. In a country formerly occupied by them. I suspect Mr Burley may be having a chat with the whips about his future prospects in a meeting not involving coffee. Whatever else he thinks, Toryboy will find that tomorrow does not belong to him.


Yesterday gave us a vision of today and tomorrow worthy of a modern William Blake. As Boyle put it in his programme notes


"We hope that through all of the noise and excitement, you'll glimpse a single golden thread of purpose - the idea of Jerusalem - of the better world, the world of real freedom and true equality, a world that can be built through the prosperity of industry, through the caring nation that built the welfare state, through the joyous energy of popular culture, through the dream of universal communication. A belief that we can build Jerusalem. And that it will be for everyone."

If you seek a manifesto opening, Ed, you could do a lot worse.
Posted by John O'Shea at 3:00 pm No comments:

Not the End of the Peer Show 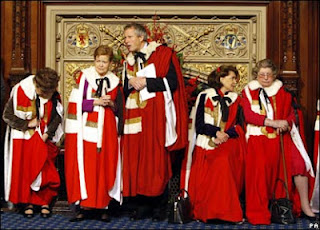 Both the Tories and the LibDems (when they aren't blaming Labour for the government's inability to marshal their own votes), are talking about how the coalition agreement doesn't or does include a commitment to reform the Lords.

Here's the relevant section from the agreement:


"We will establish a committee to bring forward proposals for a wholly or mainly elected upper chamber on the basis of proportional representation. The committee will come forward with a draft motion by December 2010. It is likely that this will advocate single long terms of office. It is also likely that there will be a grandfathering system for current Peers...."

Compare that with other phrases:


"We will bring forward early legislation to introduce a power of recall...."We will introduce a Freedom Bill.""We will scrap the ID card scheme, the National Identity register and the ContactPoint database, and halt the next generation of biometric passports..."

Elsewhere in the document, changes and legislation are clearly defined in terms of action. I think that the framers of this document knew exactly how divisive this particular element was likely to be, so to ensure agreement, it was left deliberately vague. You can read that as a commitment to move things forward to legislation, but that's not what it actually says - it only commits to taking things as far as a draft motion, not support for actual legislation, although that stage would logically follow. The programme motion is a process, rather than a policy issue.


This allows each side to argue that they are in the right and to read into the agreement exactly what they want to find, but in the most technical sense, I think the Tories have the stronger case.

However, they might find themselves hoist by their own petard, when it comes to a key part of their own legislation, the gerrymandering of the electoral system. The agreement promises the following

"We will bring forward a Referendum Bill on electoral reform which includes provision for... the creation of fewer and more equal sized constituencies"

That, the Liberal Democrats have done. Nowhere does it promise that they will be required to vote for the outcome of the Boundary Commission's deliberations when they come back to the House.


These changes are controversial, even putting aside the aspect where it is being fixed to suit the Tories (and even before we consider the further changes due in the next parliament, which will further fix the system). While Labour is the main target, the Liberal Democrats actually suffer the worse in proportional terms and there are even a few Tories who face having their seats abolished. Kicking the proposals out might get more support than they think.


The turkeys may have voted for Christmas, but they don't have to agree to be stuffed.
Posted by John O'Shea at 7:30 am No comments:

Watching Nick Clegg being taunted by the Tories and - to a lesser degree, by Labour - in the House of Commons yesterday afternoon, I was struck by the lack of support from positive interventions on his own side. I did wonder if it was part of some masochistic strategy to make him look more like a leader trying to do the right thing, but it was almost pitiful as Tory after Tory rose to apply a well-polished boot to Clegg's well-polished policy.

Aside from that, this looks like a genuine disagreement between the parties, unlike the obviously stage-managed rows that have erupted over the past months as part of stage two of the Liberal Democrat strategy for surviving coalition. Stage one was full engagement, stage two is trying to differentiate between the two parties and publicly disagreeing over certain issues. Stage three - still to come - is where the Liberal Democrats put some clear water between themselves and the Tories and separate off, perhaps abandoning the coalition for a supply and confidence model.

I don't see it breaking up the coalition, but unless the Tory whips can threaten enough tame backbenchers or divide the vote (see the excellent Bullets and Ballots blog from Nottingham University for details of how the whips handle rebels). Default setting is that the Whips get things through in the end, but I wonder how effectively they can control these rebels, even with a reshuffle in the offing, who may already have their eyes on a post-Cameron future, should the Tories lose the 2015 general election.

The programme motion is genuinely under serious threat here - Labour and rebel Tories will ally to block it and there's every chance they will succeed. The bill will still pass to second reading, because Labour will vote with the government to move it forward, but don't confuse the two - although Liberal Democrats are puffing themselves up and conflating opposition to the programme motion with opposition to the bill, as if a major constitutional change doesn't deserve decent scrutiny. As the change is arguably a change equal to altering the voting system, there is a strong argument for a referendum, which is not on offer.

Clearly, the Tories are being held to ransom over their boundary changes, which have yet to come back to the House for final approval - and the House has rejected them in the past. I've held the view for a while that we will end up fighting the 2015 election on the same constituency boundaries that we currently do - there are just too many turkeys unwilling to vote for Christmas. The Lib Dems will be looking for an excuse to vote this down - even without their obvious unpopularity with the electorate, under the new boundaries, numbers of their sitting MPs would face difficult fights against Tory incumbents. Perhaps it is instructive that the Liberal Democrats were happy to troop through the lobbies to support swingeing cuts on benefits, to treble tuition fees and slash upper tax rates, to hike VAT and cut the police, but will go to the barricades to defend a flawed plan to reform the Lords. In return for Lords reform, they are prepared to back gerrymandered electoral boundaries on a grand scale.

Democrats? Not much.
Posted by John O'Shea at 7:00 am No comments: 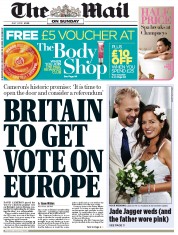 Cameron has no-one to blame for his European problem but himself. To ensure his victory in the leadership election, he promised withdrawal from the centre-right European Peoples Party grouping in the European Parliament, forcing his MEPs into an uneasy alliance with some rather wacky right wing parties. From that point onwards, he was simply writing cheques his government couldn't cash. His much vaunted rejection of any part of the negotiations over a post-bailout Europe played well with his increasingly Eurosceptic grass roots and parliamentary party, but also separated the UK from involvement with setting the future course of the EU.

Now, to judge from the weekend headlines, somebody has been overcooking what's on offer. The truth is that he is no nearer a referendum than he was a month ago. If the EU has to renegotiate treaties centrally, then that may well trigger Cameron's promised referendum, if the UK also has to consider ceding further power to Brussels, but Cameron knows that a referendum would be a distraction, a waste of money and ultimately destructive to his party.

He's riding a tiger here, hoping that by throwing a few bits of red meat to the Eurosceptics now and again, they will be kept docile, ignoring the reality that it merely makes them hungry for more.

The white coats may be flapping again.
Posted by John O'Shea at 7:30 am No comments: