A Farage of lies

Recently, we've seen UKIP cross-dressing as Liberal Democrats - if only in their enthusiasm for populist policies. One of their big campaigns is against HS2. As Nigel Farage put it in a tweet during Question Time last night - supporting a lacklustre performance by Patrick O'Flynn:

Seems clear enough. But then we look back at prehistory. Or the 2010 General Election manifesto, to be precise. In that, they promised to

Invest in three new 200mph plus high-speed rail lines including a new line between London and Newcastle with a spur to Manchester, a London-Bristol-Exeter line and a linking route via Birmingham

11.2. UKIP enthusiastically supports the high speed rail concept, with trains travelling up to 220 mph, such as the new Beijing-Shanghai service which will cut journey times from 12 hours to 5 hours 27 and successful London-Paris/Brussels Eurostar trains that have cut journey times to under 2 hours, making rail highly competitive with short haul air travel. By 2003 Eurostar had already secured 65% of the London-Paris market and 55% of the London-Brussels market, whilst the French TGV system is impressive. The high-speed line between Madrid and Barcelona took 46% of the market the year after opening, and China is now investing in 8,000 miles of high speed rail lines.

11.3 As the boss of Arup, Mark Bostock argues, “upgrading the existing track, eliminating bottlenecks and improving reliability is not a better option. Consider the west coast mainline upgrade. Its eventual cost of almost £9bn dwarfs its benefits.” The Department for Transport agrees, stating in a 2007 report: “The disadvantages of undertaking major new construction work alongside a working railway outweigh the advantages.” This argument was central to Arup's successful lobbying of government in the early 1990s, resulting in the selection of our route for the Channel tunnel rail link. Building a new railway is actually cheaper and less disruptive than fiddling with the existing network – though it requires an un-British, strategic view of national spatial and economic planning. France exemplifies the potential success. Despite labour market inflexibility, hourly productivity in France stands at $54, compared to $45 in the UK, which is recognised as largely due to its excellent infrastructure… The British Chambers of Commerce and CBI unanimously back the idea of a national high-speed network".

Now, while you may argue that this is not specific support for the current HS2 route, the fact is that they rule out construction alongside an existing line, so a new corridor is going to be required. The principles of high speed rail demand a route that is as flat and as straight as possible to achieve and maintain the top speeds, so the final route is unlikely to be tremendously different from what is currently proposed. In any case, the UKIP policy would shift the argument to different constituencies. I'm sure the Thames Valley would welcome a high-speed line slicing through the landscape as warmly as it has been welcomed in leafy Buckinghamshire.

And if you fancy another laugh, have a look at their cycling policy. While they enthusiastically deregulate on cars, including upping speed limits, the chief focus on bikes is to impose a "CycleDisc" and minimum third party insurance for cyclists. I kid you not.
Posted by John O'Shea at 8:00 am No comments:

There's a storm a comin'

In advance of their conference in a week or so's time, Tory MPs held an away day with their very own prince of darkness, Lynton Crosby, who explained the attack lines on immigration (although probably not with regard to rabid Australians). This is an interesting line from the FT:

one MP said he had wanted a bit more venom directed at the Lib Dems after their attacks of the “nasty” Tories at their conference this week. Crosby and Shapps were more interested in targeting Ed Miliband, arguing that bis polling is weak and Tories need to capitalise on that vulnerability. [sic]

Essentially, the Tories are going to unload on Ed over the next eighteen months. As Martin Kettle put it earlier this week

On 20 May this year, Labour's Iain Wright asked David Laws if the government would consider allowing the children of all those in receipt of Universal Credit to claim free school meals.


"We estimate that extending free school meal entitlement to all families in receipt of universal credit would result in more than half of children being entitled to free school meals in England, at a cost of up to an extra £1 billion per year. In the current economic climate this is not affordable."

Now that is a number somewhat larger than is proposed under this scheme, but bear in mind that the Tories will be announcing a pointless tax break for married couples which will take the combined costs of these two measures to around the £1.2 billion mark. Which is apparently now affordable.

In a letter to 38 Degrees in August this year, he wrote (my emphasis)

"We estimate the current cost of free school meals to schools and local authorities at £460 million per year, and the department's budget remains very tight. Any increase in eligibility would inevitably mean a reduction in the budget to spend on other areas."

Or we can turn to the rotating political weathervane that is Simon Hughes, who attacked Southwark Council for spending £15m on giving out free school meals.

I'm sure Simon will be back on message soon.

While I'm delighted at this policy shift from the Lib Dems, there are a couple of problems. Firstly - how is this to be funded and for how long? On past form, exactly as David Laws wrote, money is shifted between budgets, so a bit of extra cash here means a cut somewhere else. We won't get that answer until the autumn statement - even though the Tories will be spending a bit more cash when they announce their marriage giveaway.

The second question is how this will be delivered, as so many schools have scrapped their kitchen facilities. Tim Farron has been on the media stump and has suggested that packed lunches may be enough - but will that meet the aim?

I don't think we've heard the last of this policy and it may well stuck in the lunch queue for a while yet.
Posted by John O'Shea at 6:00 pm No comments:

Labour ministers got burnt when they took on Joanne Lumley over the Gurkhas.

One Tory councillor in Ealing has gone one better. He's recommended the assisted death of another national treasure, a hall-marked broadcasting giant.

Standing by for the inevitable deletion and apology. 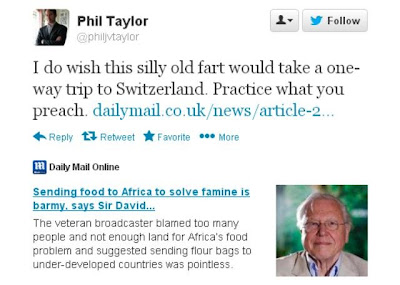 When sitting on the fence can be positively dangerous

On the one hand, Trident is a Cold War solution to a Cold War problem. Is there an enemy out there with the capability of causing such destruction that this level of potential response might demand? Is there any chance that if the worst happened that the US would not be bound to respond? A nuclear attack that destroyed London would kill 200,000 US citizens - more than live in Salt Lake City or Little Rock. But then, the major nuclear state players are hardly likely to hit the UK - would we consider responding with nuclear force to a non-state entity who hit us with weapons of mass destruction and would deterrence work in any case? Would any PM actually order a launch? There is a strong moral argument against the possession of these ultimate weapons and that we could make a statement by withdrawing from the nuclear weapon business - as has every other country in Europe apart from France.

On the other hand, it is a long term purchase. Just as few forecast the end of the Soviet Union from the chill of the Cold War in the 80s, can we foresee the threats that might be directed at us in 2025 or 2040, well within the operational lifetime of Trident and successor weapon systems? Might we need deterrence again?

For this is the thing about nuclear weapons - they are not ever meant to be used. Their efficacy lies in their deterrence value. The other side have to believe that your capacity to respond is credible, that you might be prepared to use it and that it might get through their defences. From the V-bombers sitting on their quick reaction pads in the 60s through to their submerged successors in Polaris and Trident boats, hiding in the depths of the Atlantic, that's the function of these political weapons.

The Lib Dem proposal drives a coach and horses through this idea and actually increases the potential for volatility.

We'll ignore the fantasy of having boats with dual capacity for nuclear and conventional operations. That's only possible if you shift from ballistic missiles in favour of something smaller, like a nuclear-tipped submarine-launched cruise missile. Ballistic missile boats are all huge beasts, designed for operation in the lesser-travelled parts of the world's oceans, crawling around silently, hiding away from anyone else. Hunter-killers are faster and smaller. The two roles are very different and require different equipment.

They propose to end the Constant At Sea Deterrent (CASD) - a permanent alert status that is a prerequisite for deterrence. Oddly, they suggest that they will maintain some form of patrol using boats that are not nuclear armed, which seems rather pointless. This will save money, as it will only require three boats and crews rather than the current four, which is about the only benefit. Submarines would be sortied at times of tension. On the one hand, that seems an interesting idea, but there's a story that should give concern.

Back in late autumn 1983, NATO conducted an exercise called Able Archer 83, which simulated a rise in tension and actually stepped up to the point of nuclear release. The Soviet Union was aware of this exercise and was concerned that it may have been a cover for genuine aggression - agents were tasked to report any signs of war posturing. They even put their own nuclear and air strike forces onto higher alert, considering that they might have to launch first. The West wasn't aware of the depth of the Soviet response until after the exercise ended, nor of the risks that they ran for a few days. Imagine the tensions of the Cuban Missile Crisis in 1962, but where only one side is playing for real.

Now imagine that replayed where a British government sortied a nuclear armed submarine from Faslane. Immediately, that makes a statement about any situation - it may even be regarded as a threat by a paranoid opponent, but it certainly marks an escalation. That, of course, assumes that we have a fully trained crew and operational boat available - one that hasn't just returned from patrol or is down for refit.

And that's the danger. The one thing you don't want to do in nuclear politics is ratchet up the tension, but that's just what this policy risks.

As I wrote at the start, scrapping Trident is a valid policy. Retaining a deterrent can also be justified, but you can't justify this cobbled-together policy that sits squarely on the fence, taking neither the moral high ground nor offering effective deterrence.
Posted by John O'Shea at 4:00 pm No comments: