Clarkson is no victim

It was very disturbing to see people line up yesterday to claim either that Jeremy Clarkson was a victim of the BBC lefties or that the Beeb had overreacted by sacking him. The latter claim was from Paul Staines, whose tea boy rode an armoured vehicle to Broadcasting House last week to deliver an almost-million signature petition in support of Clarkson. Louise Mensch said that we were too soft in the UK and Adam Boulton was similarly dismissive.
Neither claim is true.
Jeremy Clarkson was entirely the architect of his own downfall.
The BBC seems to have been beyond reasonable in how they dealt with some of his gaffes, no doubt influenced by the £50 million annual income from the global brand that is Top Gear. The events at the start of March were of a different order and, once the investigation was completed, the dismissal was a certainty.
Many employment contracts will specifically mention violence or the threat of violence as examples of gross misconduct that will quite possibly lead to dismissal. I can't possibly imagine any employer - with one eye on the need to ensure a safe workplace free of bullying - not heading down exactly the same path as the BBC. The employee would be suspended - suspension is a neutral act to allow things to cool down and to allow time to investigate matters, but in cases that may lead to dismissal, it is an essential precursor. The case is then investigated, those involved are interviewed and a report presented to a senior manager for a hearing and decision.
Having heard some of the details in the investigation, I would have dismissed the employee. Aside from the personal issues and the work that has clearly stressed Clarkson, there is some mitigation - he reported the matter himself and has co-operated with the BBC, but the facts are still sufficiently serious that I could see no alternative to sacking him. There was sustained verbal abuse, which continued after the assault; the assault was sufficient for the victim to go to hospital; the victim was clearly distressed by the attack and there was not even a hint of provocation, let alone anything extreme enough to justify force.
The BBC also have the Savile problem. While this is of a massively lower order of magnitude, the principle must be that no star can get unlimited protection from the effects of their own behaviour. Given that this occurred in full view and hearing of members of the public and that one of them intervened to stop the assault, the chance of sweeping it under the carpet was low from the outset.
The BBC corporate may have hated Clarkson's image and attitude, they may even have wanted to shoot the golden goose that he nurtured, but the simple truth is that Jeremy Clarkson manufactured the bullets, loaded the gun and put it in the hands of BBC management.
He isn't a victim. He gave them no choice.
The producer, who has spent ten years working on Top Gear, was abused, assaulted and has since had to deal with death threats from the social media mob, is. He deserves the sympathy and support.
Ask yourself this question - in your workplace, if someone came up, hurled invective at you, threatened your job and then punched you in the face, would you want them sacked?
This has now become another stick with which to beat the BBC, the real target for Mensch, Boulton, Staines and his minions.
Posted by John O'Shea at 10:17 am No comments:

On Saturday morning, Damian Green, former Home Office minister, came out with a mindblowingly dumb proposal. I've read some of the output of the DCLG, so I know dumb when I hear it. Defending the massive cuts to policing, he said that an opportunity to save money was being missed by the blue light services. Rather than sending a number of expensive vehicles to a motorway collision, they should just send one.
Maybe this was just an attempt to distract from five years of Tory/Lib Dem slashing of police budgets or maybe Damian actually believes that this is a remotely workable idea.
You don't even need to be an expert to dismantle his argument.
Damian's idea suggests that one vehicle could be designed and purchased that would carry a crew of trained firefighters, two or three paramedics and a number of traffic officers to secure the scene, as well as the range of kit required to manage the scene, extract the injured and stabilise them. @martinwoods  suggested this.... (HT also to @SgtTCS ) 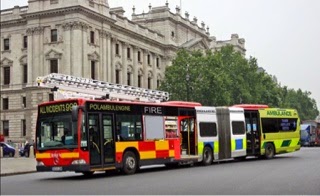 There's a reason that this hasn't happened. It is that there are different vehicles because they all have different jobs and equipment, as well as fulfilling other roles independently. The fire service will respond to a house fire that will not require police attendance, the overstretched roads policing units will be out and about tackling crime involving vehicles and enforcing on traffic offences while the ambulance service will spend their time waiting around hospitals for the emergency department to take their patients before they head off to the next job. They cannot spend their time waiting around for an incident that requires all their specialist skills.
They will have different times and jobs at the scene - the fire service will attend to extricate the injured and make the scene safe, but can then leave. The paramedics will respond, stabilise the patients and then leave to take them to hospital, while the police can be at the scene for hours, securing it for evidence purposes and investigating the cause.
The reason that it hasn't happened, Damian. They gave different, specialist vehicles because they are different specialists. Even for a former Tory minister, that was a spectacularly stupid idea. But when has that ever stopped it becoming policy?
Posted by John O'Shea at 3:15 pm No comments: